PRESS RELEASE ON BEHALF OF BAYER

Following reports from the BPCA that 44% of pest controllers felt that Covid-19 had affected their mental health during the last year, Bayer has teamed up with suicide prevention charity Campaign Against Living Miserably (CALM), to help support the industry.

“Alarmingly, suicide is the biggest killer of men under 45 in the UK,” says Alan Morris, Bayer environmental science country head.

“In an industry that is largely dominated by males working in lone conditions mental wellbeing is a big issue.

“As a result, Bayer wants to pledge its support to the industry, so this is why we’ve partnered with CALM, to help raise awareness of the services available and destroy the taboo around mental health and suicide,” he says.

“We believe that CALM is the right fit for the industry because it not only offers independent support but provides positive practical solutions which resonate with practically minded people.

“In a world where 6,500 people die by suicide in the UK every year, with 75% of these being male, we believe this collaboration could make a difference and help pest controllers who are going through tough times,” says Alan.

CALM runs a free, anonymous helpline and webchat from 5pm to midnight, seven days a week, for anyone who needs to talk about life’s problems, including those at a point of crisis.

“On average, 125 people take their own lives in the UK every week. With 75% of all suicides being male. That’s unacceptable,” she says.

“CALM exists to challenge and change this by offering life-saving services, provoking national conversation, and bringing people together to empower everyone to reject living miserably, so that we stand together against suicide.

“We are grateful for Bayer’s support which will help us reach thousands more people who could be struggling with their mental health, as well as raising awareness of CALM’s vital life-saving services. That’s why we’re delighted to kick things off with a series of virtual events, and over the course of the partnership create genuine change by removing the stigma surrounding mental health and suicide.”

Bayer and CALM will be taking part in the virtual Pest Ex event in March with hopes to attend more virtual and if possible real-life pest control events in 2021. 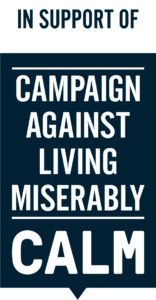