Professional pest controllers are being called upon to help create a more accurate national picture of resistance to rodenticides in rats and mice. In return, participants will get a free indication of the sample location’s status from the Campaign for Responsible Rodenticide Use (CRRU) which is running the appeal. 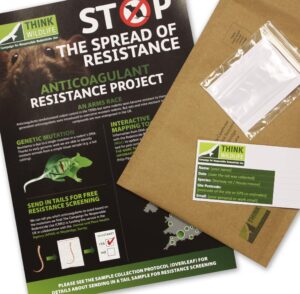 This comes about due to the “surprising and troubling” spread of resistance to rodenticides found by CRRU’s latest surveillance. It found not only that three-quarters of rats analysed carried a resistance gene but one-in-five had two different genes, known as ‘hybrid- resistance’.

This poses potentially unknown difficulties for rodent control, according to CRRU chairman Dr Alan Buckle. “A critical practicality is that, where resistant rodents are present, pest controllers could be using products that are ineffective. And where resistance genes are still absent, others may be using resistance-breaking products unnecessarily.”

This appeal involves collecting 2-3cm tail ends from freshly deceased rats or mice and sending by post in free packaging kits. These are available with detailed instructions from CRRU (thinkwildlife.org/anticoagulant- resistance-project/).

Resistance testing is a formal component of the CRRU- operated UK Rodenticide Stewardship Regime. As a measure of the regime’s success, rodenticide residues in barn owls are also monitored. The most recent results were 87% residue-positive.

This year will see a formal in-depth review by the regime’s Government Oversight Group of its implementation and impact on wildlife. To be judged effective, lasting reductions in rodenticide residues carried by non-target wildlife are expected.

Without such evidence, Dr Buckle suggests we should anticipate further restrictions on how rodenticides can be used, and by whom. “Clearly, this places responsibility squarely in users’ own hands,” he says.