The NPTA is pleased to announce that PestTech 2022 will be on the 9th November!

PestTech is one of the largest industry events, featuring over 50 exhibitors and a full programme of presentations. This annual gathering of more than 1,000 pest controllers will showcase the very latest information.

CPD points will be available for attending the exhibition as well as for seminars and demonstrations.

PestTech 2022 will be held at the Marshall Arena in Milton Keynes.

The feedback we continue to receive is overwhelmingly positive, from both exhibitors and pest controllers who attended in the previous years. We have been very impressed with the facilities at the Marshall Arena, so we are greatly looking forward to this year’s event.

So, set your SatNav for MK1 1ST or check out the details at: https://www.stadiummk.com/visit/getting-here-parking/  and we’ll see you on the 9th of November. 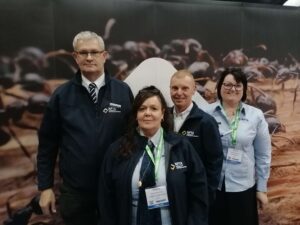 PestTech was back with a bang for 2021, with over 1,000 visitors flocking to the event’s long-awaited return.

After the difficult decision to cancel last year’s event due to the Covid-19 pandemic, that disappointment only served to enhance the buzz around PestTech 2021, with interest from exhibitors and delegates higher than ever.

A long day of preparations on Tuesday saw Stadium MK take shape with over 50 exhibitors, two seminar rooms and various audio visual facilities being set up ahead of Wednesday morning’s opening.

And what an opening it was, with delegates arriving full of anticipation well before the 9am start.

This year saw the introduction of a second auditorium, where exhibitors were able to introduce products or hold their own talks and presentations, with CPD points also available.

The traditional seminar auditorium proved as popular as ever, with delegates turning up in droves to the point that some talks were standing room only. The new lay-out was impressive too, with over 100 seats and enhanced by five screens and six speakers. CPD points aplenty were collected!

NPTA chief operating officer Steve Hallam, the mastermind behind the scenes, said: “It’s better than ever.

“We are really, really pleased about the attendance. The attendance has been absolutely fantastic today.

“The show, when you walk through the door, and the stands, have been absolutely brilliant. The exhibitors have really pushed the boat out.

“We’ve had more people through the door than ever before. The seminars have been really packed. On the whole, what a brilliant show. We’re really pleased.”

Steve continued: “The show would not have gone on if we didn’t have the support of our supporters, who are Killgerm, BASF and Syngenta. They are all our main supporters and they do an awful lot for us.

“The other people I have to thank are the staff and the team at the NPTA. We have a pest control committee and again, without them the show does not go ahead. Then there’s the staff. Donna and Maxine and John Hope have all done a fantastic job today.

The other people I have to thank are the team at the NPTA: Donna, Maxine and John Hope, along with Martyn, Michelle, Andy, Dave, John, Bobby, Phil, Isabel and our directors. Without them the show does not go ahead; they have all done a fantastic job in making the day go so well. Thank you.

“The exhibitors, who we rely on for everybody to come and see, have all said that there’s been a tremendous ammount of people to speak to. They love the fact face-to-face shows are back and they can talk to someone. The delegates are able to network, talk to their peers and it’s been brilliant.

“We’ve so enjoyed seeing members and new members here. We’ve had a lot of new members wanting join the NPTA, which has been really good from our point of view.”

Another new feature this year was our inaugural PestTech raffle; a free prize draw for delegates who simply dropped a business card into the box or wrote down their details.

“The free raffle was introduced solely as a ‘thank you’ from the exhibitors and ourselves to the delegates who came today,” Steve explained.

“We wanted to get some prizes sorted out and we do thank the exhibitors for providing those prizes. It really did explode and we did have a lot of prizes in the end. And we couldn’t have done that without the generosity of the exhibitors who provided those prizes.”

Reflecting on the event, NPTA member Peter Stewart, of Aberkill in Scotland, said: “It’s been nice to come back and see the flow again, and meet people from different parts of the country.”

The Scotsman, who travelled south and back on the same day, added: “It’s nice to see people again and obviously new products.

“PestTech is something I look forward to, coming down for the occasion.”

Tim Bloomer, area sales manager at Killgerm, said: “It’s been great to be back and have footfall, and to get to see a lot of customers today.

“The feeling is that the footfall has been bigger than normal. It certainly seems to have gone on later into the day so yes, it’s great to be back on the stand in front of customers.

“I think people have been really pleased to back meeting up with their colleagues and their friends and obviously the networking that goes on.

“It’s that portal for new people coming into the industry, to get a feel for it and understand the scale of it, to get to see all the distributors and manufacturers.”

Sharon Hughes, BASF global technical marketing manager, was heartened by the overwhelming enthusiasm from delegates to attend the event.

“I think the pandemic has only enhanced this year’s PestTech,” she said.

“While all the Zoom calls etc are really good, you can’t beat walking around, speaking to the industry, speaking to other pest controllers. There’s nothing that replaces that, like bouncing ideas of each other. You don’t get that on a Zoom meeting.

“People recognise they need to interact. They’ve missed that. It’s not just a day out. It’s nice to meet everyone but on a professional level, this type of interaction, gaining knowledge from the symposiums, you just can’t beat that, listening to everyone’s questions.

“It’s nice that people recognise that that had it’s place, and still does, but at the end of the day these are essential get-togethers for people.”

Daniel Lightfoot, UK business manager for Syngenta Professional Solutions, agreed: “It’s been amazing. Absolutely amazing. It’s been two years since we were last here and the energy and the buzz is like nothing I’ve ever seen before.

“We’ve had an amazing day, non-stop, and I’m absolutely knackered, if I’m honest! It’s been brilliant.

“Some people are probably concerned about coming, and I totally understand that. But also there’s a lot of people that are just desperate to meet up, connect, engage. People energise people and I think that’s the best bit.

“People come on the stand and the energy goes up. There’s a real engagement. I think everyone’s fed off that all day and hopefully, that’s really reflected in everybody’s enjoyment of the show.”

The event was still buzzing as it drew to a close, such was the enthusiasm for this year’s return.

And what a way to finish, with the Back To The Future themed PCN Dinner. The free bar was unsurprisingly a hornet’s nest of activity, followed by a superlative dinner and entertainment in a stunning setting. All for a great cause, supporting the amazing charity Water For Kids.

If this year’s event was highly-anticipated, it’s success has only whet everyone’s appetite even more for next year’s PestTech at the same venue. Roll on November 2022!

We Value Your Feedback

As a way of helping us improve future PestTech events, we would like to ask you for your feedback on PestTech 2021 and suggestions for future events. We would endeavour to take your suggestions on board as much as possible.